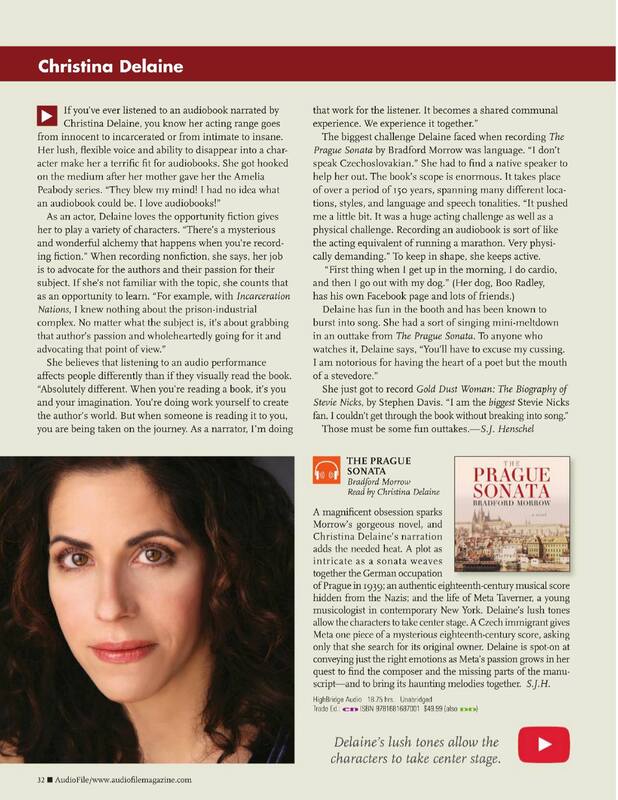 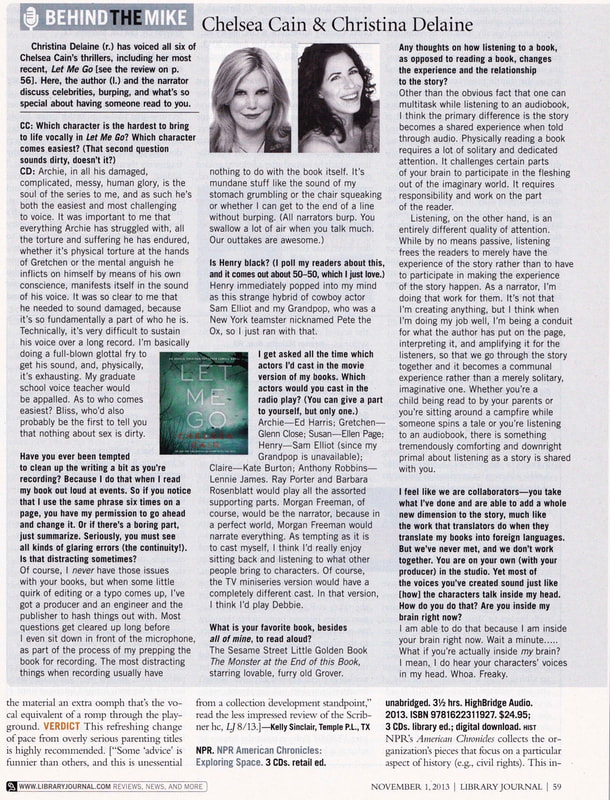 Fasten your seatbelts! You’re in for a riveting ride through LA’s streets, beautifully delivered by Delaine, whose conversational tones warm thieving heroine Elle’s narrative into an intimate one-on-one chat with a confidante...Throughout, Delaine seems to tighten her voice with the rising tension, then effortlessly softens it with emotion....Delaine’s exquisitely nuanced performance keep listeners enmeshed and entranced." — Booklist Online, Starred Review

Delaine handles the fever pitch of the story and the rapidly switching narrative points of view with grace and style." - ALA Booklist, review of BLACK SWAN RISING 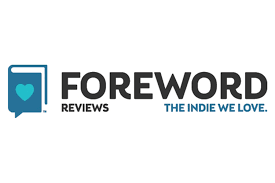 While book sales have had their ups and downs in the past few years, there is one very vocal segment of the industry that seems to seeing only ups: audiobooks. It could be the rise of the smart phone, or more time being spent in cars, or it could simply be the soothing voices of audiobook performers like Christina Delaine. She’s narrated a number of indie books, including Baz Dreisinger’s newly released Incarceration Nations: A Journey to Justice in Prisons Around the World. I was curious about what audiobook narrators do to prepare for a very long storytime, and whether authors should do anything differently in the audiobook age.

Should authors be narrating the audio versions of their books, or should they hire a professional like you?
Christina Delaine: It's hugely humbling when an author trusts me with their 'baby.'They should hire ME! Seriously, though, it depends on the author. Neil Gaiman is so fantastic narrating his own work. I listen to all of his books and I just can’t imagine anybody else narrating his work. He’s really a great, gifted actor with a lovely, flexible voice that lands so easily on the listener, and his character voices are delightful. He’s got wonderful breath control, and outstanding timing.
Not every author is as versatile, though, and I greatly respect the ones who recognize that a skilled actor can bring something special to their work that they perhaps cannot. They’ve put in so much time and sweat and love into the book, so it’s hugely humbling when an author trusts me with their “baby.” You want to get it right and honor their work on their behalf.

Audiobook sales are rising, which means increasingly this is how more and more of the public is “reading.” Should authors be thinking more about how their work would sound when read aloud?
I would hope an author wouldn’t try to alter their creative voice to suit the marketplace, but only have the priority of writing the best version of the book that lives in their hearts, minds, and imaginations. Books are meant to be read and audiobooks are meant to be listened to. If an author’s work is good, traditional readers will take joy and satisfaction in reading. If the narrator who has been trusted to voice an authors work is good and conscientious and able to be a channel for that work, then listeners will take joy and statisfaction in listening.

Jules Verne had no idea what an audiobook was when he wrote Around the World in 80 Days way back in 1873. He was just writing what he was moved to write, without a thought as to how it might sound aloud. I just listened to a fantastic audio edition of that book narrated by the wonderful Jim Dale. I loved it! But, of course, my experience might have been vastly different if it were read by a different narrator. Great narrators can greatly enhance the experience of a great book, but I think writers shouldn’t necessarily write with that in mind, and should just follow their muse.

Three questions in one: What is the most challenging book you’ve performed? Which was your favorite? Do you have a favorite genre?
All books have their particular challenges, but of recent work, I’d say recently, Mothers, Tell Your Daughters by Bonnie Jo Campell was pretty challenging. It’s a collection of sixteen short stories, exclusively narrated by me. Each story was completely distinct, each with it’s own world and tone and characters, and so it was really like narrating sixteen separate books. When you narrate a full length novel, you find the flow and hit your stride a few chapters in and very often, you go back once you’ve finished recording the whole book and rerecord the first chapter or two, having become more confident about the narrative voice. With short stories, you really have to get it right the minute you’re out of the gate. Plus, Bonnie’s writing is utterly fantastic, so viscerally alive and powerful and filled with terrible beauty, that I so badly wanted to get it right. It was truly an honor to perform her work.

As for favorites, I have lots of them. I find something to love about every book I perform. Patrick Hoffman’s The White Van is such a masterful thriller; I couldn’t believe it was his debut novel. Amanda Filipacchi’s The Unfortunate Importance of Beauty was so witty and whimsical and magical. I love her sense of humor and the way she tilts the prism to make you see the world differently. Carla Norton writes villains who are equally as awesome as her heroines, and they are tremendously fun to voice, as does Saul Black.

Personally, I love all sorts of books. I’m a voracious reader across genres, and I get to narrate all sorts of genres I love, but I’d say the genre I’m best known for as a narrator is the thriller. I’ve got a fairly deep voice, which lends itself to the genre. I can narrate at what on one of my favorite audio engineers, Iris McElroy, coined “the speed of suspense” and I’m not afraid to go to really, creepy dark places. I love voicing the bad guys. When Carla Norton gave me the incredibly twisted Daryl Wayne Flint to voice, I did a little dance of glee. It’s hugely fun to scare the pants off people.

Here’s a question that many parents who read to their children have: Do you go full-force into different character voices, or do you just hint at them with different inflections?
I do both. Anytime I narrate an audiobook, my main goal it to have it “be what it is,” to have my work align as closely with the authors intention as possible, as far as I can perceive it, so the choice to voice or not to voice characters is always based on what that particular book demands. There are some general distinctions, though, when it comes to narrating nonfiction as opposed to fiction.

When I’m narrating nonfiction and quoting real people, I generally only hint at an inflection. Many times, in a nonfiction situation, I’ve not heard what the real person that I’m quoting sounds like, and I don’t want to misrepresent them, so rather than voicing them as a full-force character, I try to “think” them full force—to really understand and get behind their point of view. So, in nonfiction, being a sincere advocate for the point of view of whoever might be speaking is my main job and primarily informs my vocal interpretation of them.

Fiction is a whole different ballgame. My main job in fiction is to perform the book and all of the characters in it, to do my best to vocally manifest the world the author has created. In fiction, I absolutely use character voices or any accents the author has endowed a character with. My choices may be broader or more restrained depending on the style of the book, but I definitely try to bring every character to life by giving each a unique voice. When a book is well written, I actually hear the voice for each character distinctly in my head on my first read through, and then I just voice them as I hear them.

You’re trained as an actor, but as an audiobook performer you’re a cast of one. Is there a difference in how you prepare to narrate an audiobook than, say, how you get ready for a stage or film performance?
Definitely! Audiobooks are such huge undertakings. If you try to micromanage your performance, you will not be able to see the proverbial forest for the trees. I often don’t get a manuscript more than few days or maybe a week or two before I’m in the studio recording it. I’ve read the book at least once or preferably two or three times, and have decided and notated what character voices I’ll be using, if any. But after that, I’m in front of the microphone, doing my best to get out of my own way so I can be a conduit for the authors intentions and the story as a whole, and hope that it’s enough so that the listener can fill in the blanks in their own imaginations.

In audiobooks, I can never be as specific as I’d like because there just isn’t enough time; the scope of the work is too big. You can’t plan out every moment of a 14-hour book if you’ve only had a few days to prepare and record it. When I’m doing a play or a film, with weeks of rehearsal to focus on just one character who is only one part of a final product that is generally much shorter than your average audiobook, the smaller scale of my responsibility gives me the opportunity to create a much deeper, specific, nuanced performance.

Is a sore throat a cause for panic? And what’s the secret to keeping your voice so smooth and pleasant to listen to?
YES!!! There is nothing quite so useless and distraught as an actor without a voice. I go to great lengths to maintain my vocal health because it’s my livelihood. I caught the upper respiratory infection that was going around this winter, and I had three weeks where I could not work because I sounded not at all like myself. I had to push back two audiobook projects and got replaced on a bunch commercial voice overs. I was beside myself. Getting sick is generally not an option if I want to keep working, so I try hard to take care of myself. To maintain my voice, I do vocal exercises everyday. I try to get enough rest and stay hydrated, especially when I’m in long recording sessions during the day (a daily narration session might be six to eight hours long. We might take breaks, but still, that’s six or eight hours of mostly talking.) and I make sure to stay quiet when I’m not actually at work if I’m in the midst of an audiobook record.
-Howard Lovy, Executive Editor of Foreword Review
March 31, 2016